The prayers, together with the vapours of hot momos, come floating towards us when we approach the Tibetan refugee camp and handicraft center in Jawalakhel, Kathmandu. People are turning the prayer wheels in the outer wall of the Buddhist temple near the entrance.

Upon careful study, we gather that the Tibetan characters on the wheels mean ‘Om Mani Padme Hum’, often interpreted as ‘hail to the pearl in the lotus flower’. It is the mantra of Avalokiteshvara (in Sanskrit), the Bodhisattva of Compassion, who is venerated by Tibetans as Chenrezik and by Chinese as Guanyin. Chanting the mantra means to identify with Avalokiteshvara’s nature of compassion, something many people attempt every day. Freya too, sends some prayers into the world. She, in fact, is starting to flood the world with pearls in lotus flowers, but her parents interrupt her spinning that prayer wheel like a madman.

On the other side of the city, the new Chinese ambassador to Nepal is being interviewed by the Kathmandu post. He expresses how pleased he is about Nepal and China’s friendly relations, as well as Nepal’s ‘one China’ policy, which states that Tibet and Taiwan have historically always belonged to China.

Historical legend tells that Avalokiteshvara is so moved by the immense suffering of all sentient beings, that he vows to the Buddhas of the ten directions to help all, and to shatter into a thousand pieces should he tire of his task one day.

About 20,000 Tibetans live in exile in Nepal, about 1800 of which in the Jawalakhel refugee camp. The camp was established in the 1960s with help from the International Red Cross and administered by UNHCR. Freya waves to old wrinkled faces; faces that must have seen the snow of the Himalayas while fleeing Tibet. She waves to middle-aged energetic faces; faces that have known no other occupation but weaving for the nearby handicraft center. She smiles to full moon baby faces; faces that have never seen and perhaps never will see the homeland and its capital city Lhasa.

Often compared to “a bright pearl shining with dazzling brilliance on the snow-covered plateau,” Lhasa deeply impressed the Chinese ambassador, who visited the city on his way to Kathmandu. He tells how, since the “peaceful liberation” of Tibet in 1951, “Tibet has fulfilled two historic leaps: from a society of feudal serfdom to one of socialism; and from a state of isolation, poverty and backwardness to one of opening, prosperity and civilization.” As he speaks, the Chinese military occupation of the Kirti monastery, including the arrests and ‘re-education’ of hundreds of monks, following the death of a Tibetan monk who set himself ablaze in protest against Chinese repression, is ongoing.

For the 1800 Tibetan refugees in the Jawalakhel camp in Nepal, it is very difficult, if not impossible, to purchase land, find work, obtain health care, or send children to school, because their legal status is unclear. Moreover, they are facing increasing harassment, as the Chinese ambassador, in conversation with Nepalese government officials, again stresses that “anti-China activities should not be allowed on Nepalese territory.”

“So many are still suffering…” Avalokiteshvara sighs, when he steps back and observes the results of his immense efforts. A sense of despair creeps into him… and -bang!- he shatters into a thousand pieces.

Freya runs ahead of us, towards the prayer wheels, when we return to the entrance of the camp. This time, her parents let her spin spin spin the wheels until the valley is flooded with pearls in lotus flowers, waves of them are splashing against the rim of the Himalayas, flooding the Tibetan plains, the streets of Lhasa, and Beijing. Further beyond the pearls in lotus flowers go, wave after wave after wave, across the Pacific Ocean, to Washington, London, Brussels, Moscow. And with the waves come the Buddhas of the ten directions. They gently lift up Avalokiteshvara’s broken body, heal it. They even equip him with thousand arms and nine heads, so that he may continue his noble work in stronger capacity.

And so he does. 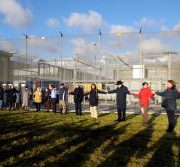 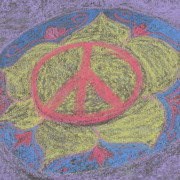 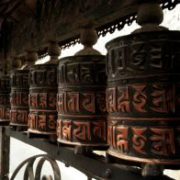 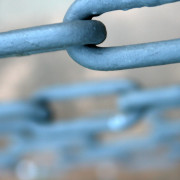 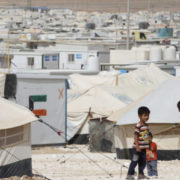 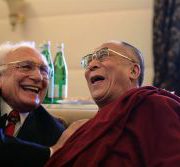